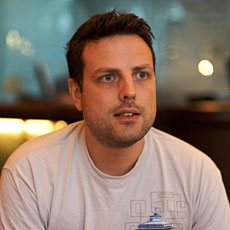 Nick Ludlam is BERG’s Chief Technical Officer. Previously, Nick has worked for some of the largest post-production facilities in Europe, including Framestore and The Mill, across a broad range of projects. In 2009, he created the professional colour grading application Mill Colour, which has had over half a million downloads to date. At Framestore he managed a team of developers responsible for the 35mm film scanners and laser film recorders, and created systems for monitoring the multi-terabyte clustered storage servers.

He has also worked for the BBC, Six To Start, The Economist, and NASA, where he worked at UCLA on innovative ground systems designed to bring Mars space probe data to the general public via the Internet. He also contributes to a number of open source projects, including MacPorts and MacRuby.