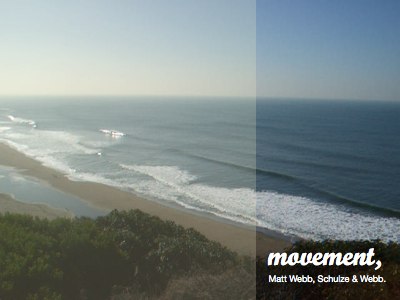 Two metaphors have been used successfully in designing for and thinking about the Web: the Web as a physical space, and websites as extensions of the body. The synthesis of these is what we could call Web 2.0. But now we have to contend with the importance of experience, in addition to utility, and the increasing demands on the attention of our users. A third metaphor may be reached by regarding users as trajectories, flowing through our websites. By considering the Web in motion, an approach which uses a ‘motivations flowchart’ is demonstrated, where the states of a user are used to derive features regardless of the interaction medium. And an interaction pattern is demonstrated: Snap is syndicated interactions, bringing choices users have to make away from websites and together on their desktop. Finally some challenges for the Web in 2008 are posed: other devices; groups; the future—how does Web design itself become open to amateur creativity, and what new tools should be built?

Movement was delivered at Web Directions North in 2008.

On the company blog, I’ve pulled out the Snap concept as its own post: read about Snap.

Many of the ideas in the talk come from previous presentations (at which point they’re linked), and from a longer series of notes on my weblog: read ‘wrapping up 2007’ at Interconnected.

We’ve always had metaphors to understand and design for the Web.

The original conception of the Web was as a library of documents. Our building blocks were derived from spatial ideas: “breadcrumbs,” “visits” and “homepages” were used to understand the medium.

Website-as-application was a new and novel metaphor in the late 1990s. The spatial concept of navigation was replaced by concepts derived from tools: buttons performed actions on data.

These metaphors inspire separate but complementary models of the Web. But the Web in 2008 has some entirely new qualities: more than ever it’s an ecology of separate but highly interconnected services. Its fiercely competitive, rapid development means differentiating innovations are quickly copied and spread. Attention from users is scarce. The fittest websites survive. In this world, what metaphors can be most successfully wielded?

Matt takes as a starting point interaction and product design, with ideas from cybernetics and Getting Things Done. He offers as a metaphor the concept of the Web as experience. That is, treating a website as a dynamic entity – a flowchart of motivations that both provides a continuously satisfying experience for the user… and helps the website grow.

From seeing what kind of websites this model provokes, we’ll see whether it also helps illuminate some of the Web’s coming design challenges: the blending of the Web with desktop software and physical devices; the particular concerns of small groups; and what the next movement might bring.

The slides and notes are online: Movement, slide 1