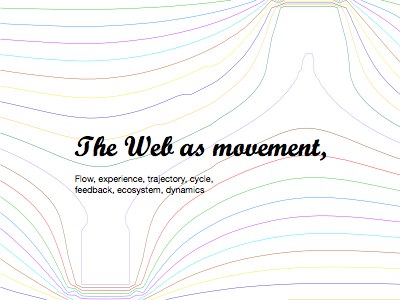 Previous slide Slide 16 of 41 Next slide

So here’s my approach: the Web as movement.

Some of the words associated with this metaphor… flow, experience, trajectory, cycle, feedback, ecosystem, dynamics.

But pragmatically, what does this mean? Let’s take Flickr, which is exceptionally good at doing this. It’s a useful website, sure, and it is sure of its place among a constellation of people – the social world of sharing and identity – and a world of other products like cameras, and screensavers, and toys based on the pictures.

But also it’s structured to bend the trajectory of users back into itself. External widgets capture users and send them into Flickr from blogs and other services. Internal groups, discussions, and the “recent activity” feature keep users cycling round. A way of sending temporary invites by email to show pictures to friends who aren’t yet members – guess passes – turn ever user into a pusher, and every photo into a gateway drug that will end in Flickr membership.

Flickr is a perpetual motion machine that puffs out beautiful photographs.

So we can have a bit of a breather, I want to have a look at a few other systems which are self-contained or a series of movements.

[Facebook is another great example. Read about viral loops and widgets for more.

And, just incidentally, I’m reminded of the Greg Egan short story in Axiomatic: “Unstable Orbits in the Space Of Lies”. Highly recommended!

Oh, the image: I’ve been playing with solutions to Laplace flow equations, and this is some of the output.]

Previous slide Slide 16 of 41 Next slide