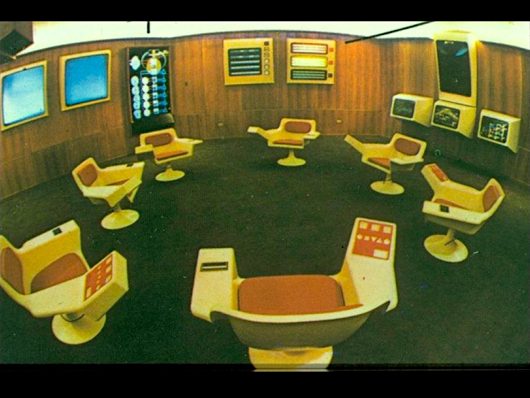 Previous slide Slide 10 of 56 Next slide

It’s a control room from Project Cybersyn. From 1970 to 1973, the revolutionary Chilean government managed to recruit Stafford Beer, a cyberneticist, since he worked on organisational science and the feedback loops of management in corporations. He was pretty famous at the time.

The Chilean government called him up, and he built what he called “an electronic nervous system” connecting all parts of the country to the government.

It all worked by Telex, and there were 7 seats in the control rooms because that was known to be the most efficient. And these are swivel seats because swivel seats encourage creativity.

These rooms would feed complaints, comments and statistics out to the government, and it meant a centrally planned economy actually worked. Factories installed it on their floors, because they could tell the government what they needed, and it was liked centrally too because they had up-to-date stats the whole time. It was really egalitarian.

In 1973, the counter-revolution overthrew the government and they ripped it out, not understanding what it was.

What I love is that it’s like the crystal seed of an internet built around small groups and working together, and socialism, one that never happened. Just, well, there are these alternative ways of things happening.

Previous slide Slide 10 of 56 Next slide