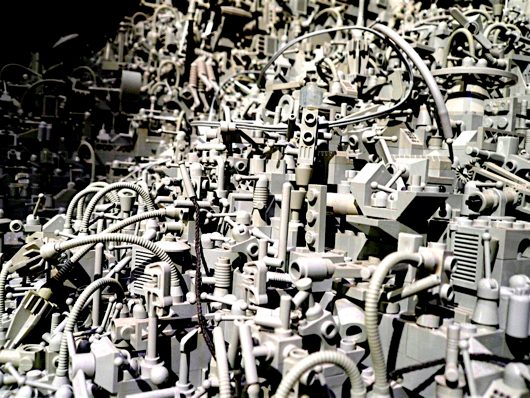 Previous slide Slide 11 of 56 Next slide

My last science fiction story is a short story by Bruce Sterling called Taklamakan. In it he speculates about an economic war between basically America and China. And in the book he proposes a way to commoditise design by running it through genetic algorithms and computers running virtual realities. He explains this by taking about making a better can opener. Here, let me read…

Well, you could study other people’s can openers to improve the design. ... Or you could just set up a high-powered virtuality with a bunch of virtual cans inside it.

(Then he says you evolve blobs of goo in the virtuality.)

You’re running a million generations of a million different possible can openers, all day every day, in a simulated space. [...] So to make one inside the real world, you just print it out like a photograph. Instant cheap consumer goods.

I have to admit, this doesn’t feel so far-fetched. The stuff I see in shops, hey, the weird websites I see launched, there’s often not any design there. It’s a matter of doing ten thousand things and seeing what works.

Which is no bad way of working, if I’m honest. Sometimes, at the beginning of new sectors, new possibilities, what you want most is variety, so you can cross-breed and evolve, like with our radios, so see what really works. You know, it really did work very well for the Web.

The same thing happened for electronics, back in the day.

Previous slide Slide 11 of 56 Next slide