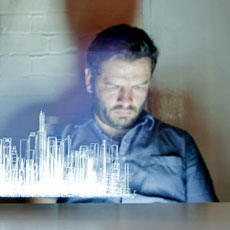 Matt is a Principal at BERG and has been delivering digital products and services since 1995. He was creative director for the launch version of the BAFTA award-winning BBC News Online. Between 2003-2005 he worked at Nokia on areas as diverse as RFID/NFC applications of tangible/physical interfaces and the human universal experience of play. From 2005-2007 he was director of user-experience design for Nokia’s Nseries range within Nokia Design. In early 2007 he co-founded and designed Dopplr.com, which grew into an influential and popular start-up travel service, before being sold to Nokia in the autumn of 2009.

He studied Architecture, qualifying in 1995 RIBA Part II and BArch from the Welsh School of Architecture. He has spoken at events such as Reboot, Ars Electronica, Webstock, O’Reilly’s Etech and FooCamp; is a visiting tutor on the Design Interactions course at the Royal College of Art and has written on interaction design, comic books and planetary-scale, self-replicating robot dogs for 10 years at http://www.magicalnihilism.com.