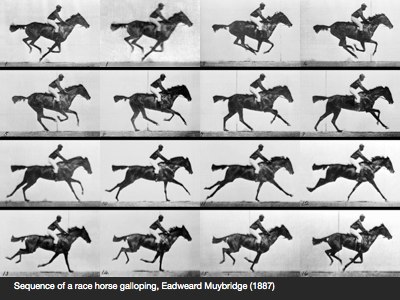 Previous slide Slide 37 of 41 Next slide

Okay. The second issue, as I see it, is that the Web – and computing in general – is built around the concept of individuals. Even in the earliest days, people used computer in groups only via the mediation of timesharing, where the mainframe would jump from one person to another in quick succession, and that’d provide the illusion that all of them were using the computer simultaneously.

This is the same illusion you get going to the cinema, or the theatre or whatever you call it. The “movies.” Persistence of vision is a lucky quirk of the eyes that means switching static images 24 times a second looks like a moving scene.

In the just the same way, a website that serves multiple individuals in quick succession provides the illusion that a group of people are co-present.

It’s that lucky quirk of webservers which the whole of illusion of social software is based on. It’s why having me and a 1,000 other people visiting a magazine website isn’t like publishing a website 1,000 times, but having a single magazine which is magically shared between us.

Social software has been really good within the limits of this lucky quirk.

What social software isn’t so great at is being software for people who are already friends or groups in the physical world.

What we’ve done with social software so far is take non-social, individual activities and put them in a social context. Like photos, and bookmarking, even banking.

Then what we did was port in existing concepts that people use to interact in social settings, and represent them online. That’s stuff like identity, reputation and sharing. And then we saw that that substrate produced patterns that we recognised too, like groups and factions and power relationships.

Previous slide Slide 37 of 41 Next slide