The Hills Are Alive with the Sound of Interaction Design 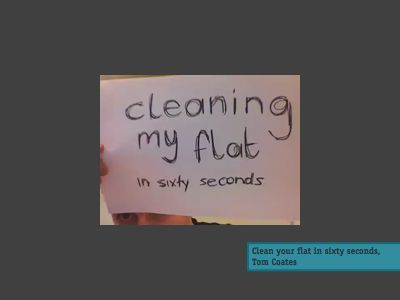 Previous slide Slide 38 of 50 Next slide

This is Tom Coates tidying his flat in 60 seconds. He recorded himself and made a time-lapse video app. “Performance cleaning” he called it. It was a motivator to do the tidying. Brilliant.

Imagine if your vacuum cleaner, your hoover, wasn’t about your house being tidy… that’s the goal. Instead, imagine it was about the process of tidying up. A game. How would we design it differently?

There’s a product in the U.K. called Shake n Vac. I imagine it’s in every country in the world, under various names. You sprinkle the freshener powder onto the carpet and then vacuum it away. I don’t know whether you’ve ever done this, but it’s pretty addictive. You scatter it round, then make it tidy by making lines, then cross hatches, then other patterns.

It taps straight into the same ‘make everything neat’ gland that billiards players have putting away the balls, or photographers have compulsively tagging their photographs. Or Tom has given himself, tidying his flat under the camera.

Previous slide Slide 38 of 50 Next slide

This presentation is on how to design products for Generation C, and is called The Hills Are Alive with the Sound of Interaction Design. It was originally delivered in January 2007.