Shownar tracks online buzz around BBC TV and radio programmes, highlighting shows that are surprisingly popular, and conversations on blogs and Twitter.

Designed and built by BERG for the BBC, it uses the crowd to aid discovery of BBC programmes, and helps programmes connect with their audiences.

Read about Shownar on the BBC Internet Blog. 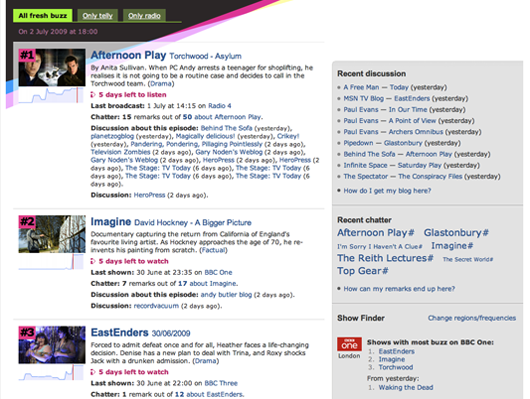 The website shownar.com is a user-facing front-end around a sophisticated data ingest and mining technology, which is due to enable buzz tracking and serendipitous connections on other BBC properties over 2010.

Shownar began as a collection of aspirations to reflect the BBC audiences’ interest and conversations, aid discovery and content journeys around programming, and engage with social media. The particular approach to meet these needs – data-mining and the form of the website – emerged in subsequent workshops and after a period of material exploration.

From consumption to engagement

At any given moment, there are some 8,000 BBC TV and radio programmes either available to watch or listen online, or coming up in the next week and provoking discussion. An automatic solution to track buzz is required.

Shownar has four primary data partners: BBC internal Web analytics for page views; Yahoo! BOSS for Web searches; Nielsen BlogPulse to monitor 100 million blogs; Twingly for Twitter and microblog service feeds. Together with access to the BBC Programmes website and data, a model of attention paid to the BBC’s media output is created.

To build the attention model, there are two prerequisites: 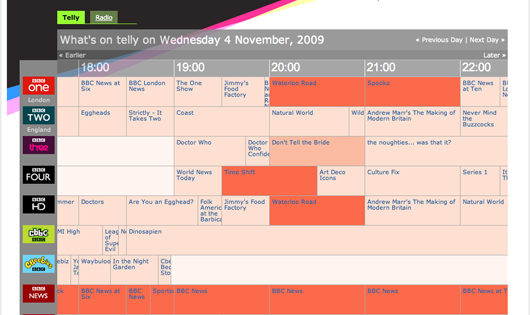 The attention model is data-mined using a custom algorithm. What Shownar presents, on its front page, is a measure of surprisingness: if a show broadcast in a late night slot on a niche channel suddenly has more buzz that the model would predict from those facts, it ranks high for surprisingness. But a daily soap opera that typically attracts millions of viewers is popular, but not surprisingly so.

Shownar aims to promote both the surprising and the extremely popular. The algorithm has also been tuned to promote social media engagement.

In this way the technology provides for a richer relationship between programme makers and audiences: the individual show pages act as broadcaster dashboards, accumulating links back to attention on blogs and Twitter, and the site itself helps members of and groups in the audience find one another to discuss and debate. 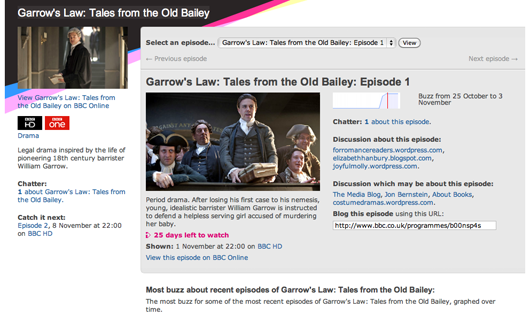 Shownar is an experimental prototype scheduled to run until the end of 2009. The website demonstrates many features of the technology invented for this project: discovery of both popular and hidden shows; show navigation ordered by popularity or similarity; feedback dashboards for programme makers; the aggregation in realtime of social media responses across a vast Web. As the BBC develop the technology of Shownar further, we look forward to seeing some of these uses appear in new contexts, improving bbc.co.uk for the BBC and for audiences.

Posts on Shownar from the blog