Modifying a cheap toy truck into a drawing machine, looking into how we interact with tools that work without people, and considering a playful way of making pictures.

We enjoy experimenting with novel interfaces, machines, and (from time to time) computer peripherals. Using a cheap toy truck (the Inductive Truck) we modified it to become a drawing machine. This lets us look into how we interact with tools that work without people, and consider a playful way of making pictures. 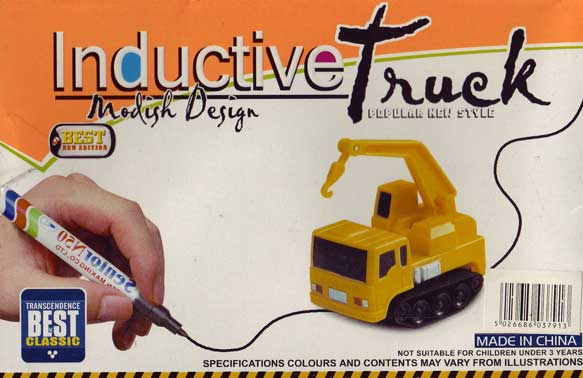 The Inductive Truck was available from Maplin for £2.99. In the box are four button batteries, a permanent market and a thick printed line, and the truck itself. On the base of the truck are two LEDs and two sensors to pick up the reflection from the surface the truck is on. The two motors in the truck’s caterpillar tracks are controlled by the sensors independently. When the truck drives over a black line, the side that has sensed the line (from the lack of LED reflection) stops its motor and so the truck turns along the line. Drawn on a flat surface, the truck drives along black lines.

(In mathematics, an inductive argument is one made step-by-step, repeatedly, to reach a proof. The name of the truck is perfectly chosen.) 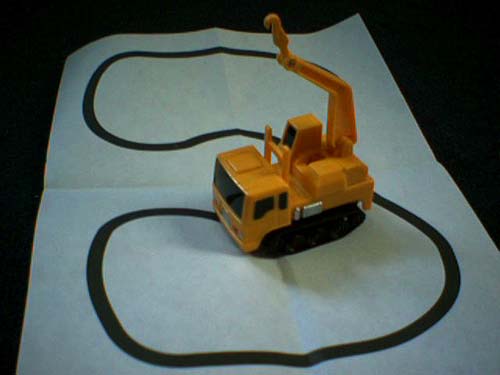 The original truck, on its demo track

Feedback is at the core of cybernetics. The quintessential feedback control is the thermostat: by having the ability to measure whether the temperature is higher or lower than a set value, and coupling this to a switch for a heater, the temperature can be controlled precisely without having to have analogue heater control.

And cybernetics is at the core of computers and all information technology.

The truck was making feedback in a limited way, with the black line sensors and the motors—but could it also become autonomous, creating its own track to follow? And could we use this truck to expose and illustrate the concept of feedback?

Could we embody Braitenberg’s thought experiments in our truck? 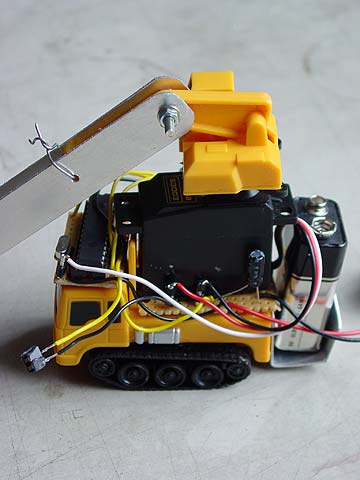 We developed a modification to the Inductive Truck made up of some simple electronics, a servo and some machined aluminium. By attaching a pen to the front of the truck on an arm, the pen can be moved from side to side and so draw a line for the truck to follow.

In the very few days we spent on the truck, we reached proof-of-concept stage and had the truck driving a path it was creating just ahead of itself, with the arm moving slowly back and forth.

Given this path, and automation in the servo controls, the truck becomes an drawing machine. Given a large enough surface, we hope to someday develop the truck into an autonomous, algorithmic pen, to make spirographs. Or perhaps we could make more complex pictures, with a wireless control for human control of the pen arm. 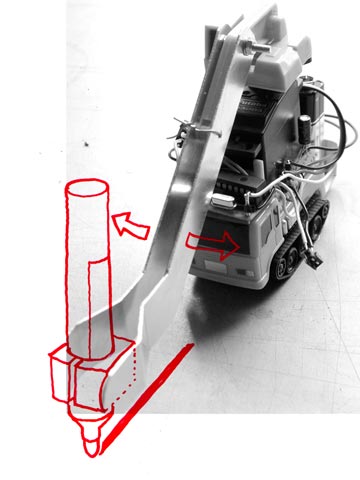 Machines that work without people

What other machines that work without people are possible? How do we sensibly interact with them? Are these interactions intrinsically different from the ones we have with simpler tools?