From Pixels to Plastic 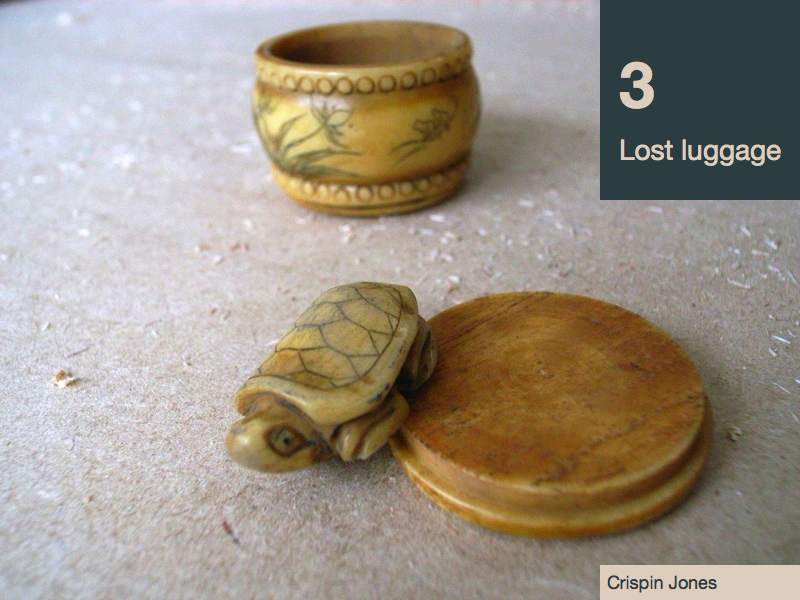 Previous slide Slide 24 of 36 Next slide

This image is from a project by one of my favourite designers, Crispin Jones about lost luggage.

Crispin has been bidding for lost luggage. If no one claims the luggage in 45 days at the British Airport Authority lost luggage office, then it is sold under auction. He takes items from the luggage and sometimes the material from the baggage itself, and makes new luggage tags from them, to be carried like charms with your existing baggage. The idea being that once something is lost, it’s “lostness” or potential for being lost is used up and it will protect your bag from being lost.

What this shows us is that objects carry with them the story of their whole lifetimes. We can’t help thinking about the processes in which they’ve been involved.

Think about the idea of tapu in Polynesia. Tapu is a magical concept which is applied to objects, places, activities or things which have been involved in magical rituals or could be involved. These tapu things are set apart and treated carefully. So a house in which someone of power has died becomes tapu, and you mustn’t cook in it. Or the chief’s nail clippings could be used to express power over him, so those are treated as tapu and kept apart from regular, unpowerful objects.

Are these things powerful in themselves? Are they dangerous? No, i don’t think so. They carry mana, the magical force that flows through them like a current. They smell of magic.

In our own culture, we imbue objects with what they’ve been through too. Britney spears’ hair was on sale on eBay, imbued with the power of celebrity. Certain brands carry with them the smell of money, of wealth.

Now we can make use of this. we’re trying to design and communicate experiences or activities, and what we’re finding here is a natural way that people bundle up whole experiences into objects.

Of course, so far I’ve said we can decorate experiences in a number of different ways to make experiences engaging—one is observation, and another is using automation. i haven’t said yet what these experiences are. So let’s take a quick look at the alternative ways of dealing with the book purchase experience.

Previous slide Slide 24 of 36 Next slide

This presentation is on Generation C and why to work with physical products, and is called From Pixels to Plastic. It was originally delivered in March 2007 at ETech 2007.